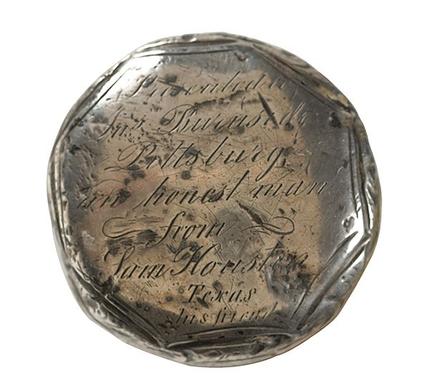 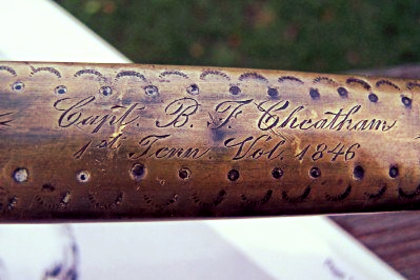 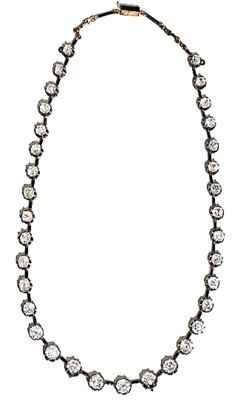 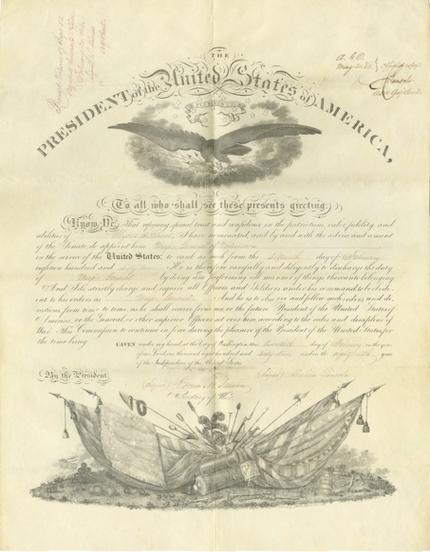 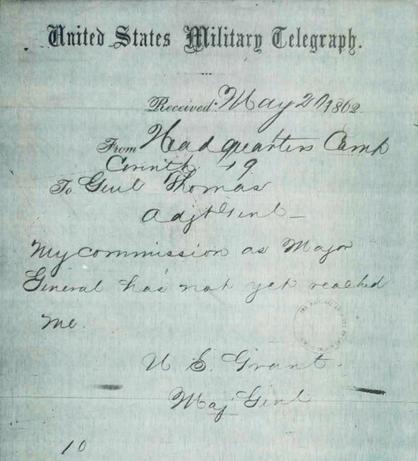 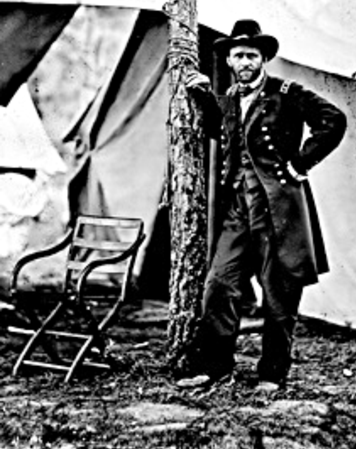 The Secession Cup of South Carolina

​the Birth of the Confederacy!

​Above: Grant's telegram requesting this appointment. The above is in the National Archives, sent to us from the Grant Papers in Mississippi - 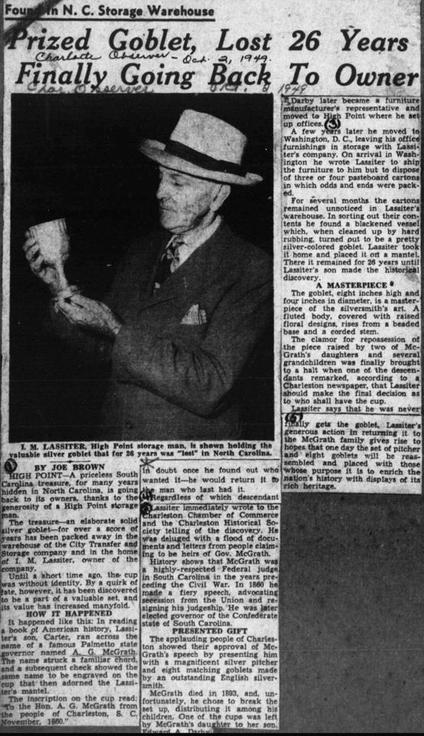 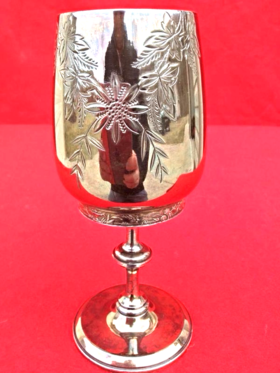 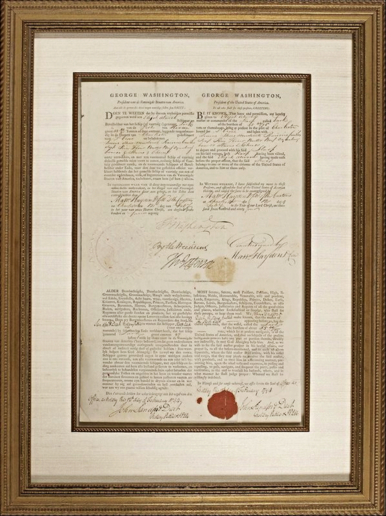 An American Treasure: Ulysses S. Grant's Newly Discovered Appointment as Major General, From the Collection of the Grant Family Descendants
From camp outside Corinth, Grant requests and receives this momentous appointment, a reward from Lincoln for consequential victories at Forts Henry and Donelson 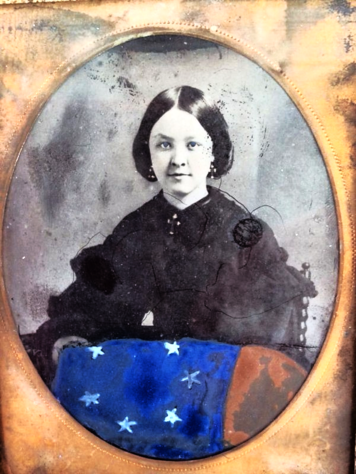 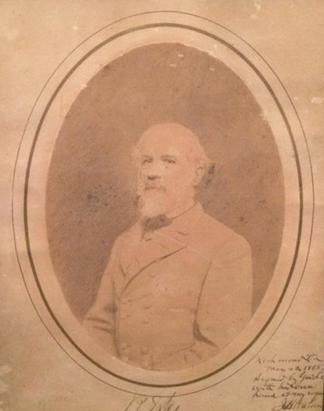 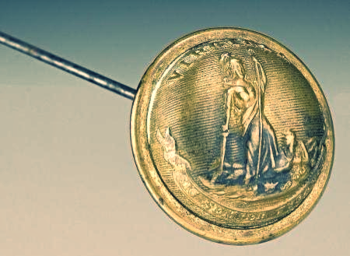 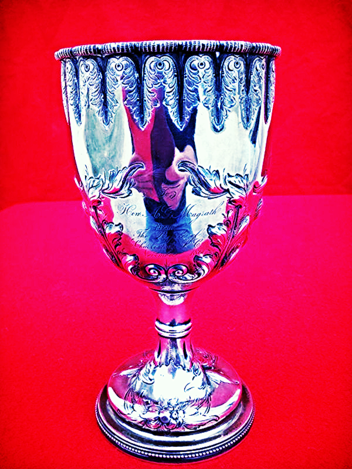 This document, not previously known to exist, has been passed down in the Grant family
In the wake of Shiloh, just days before the occupation of Corinth, Grant requests and receives this very appointment.
One of the great appointments in American military history, and the only known general's appointment of Grant not in an institution
Our gratitude to the Abraham Lincoln Papers, the U.S. Grant Papers, and the Library of Congress, for their research assistance
The battle of Fort Henry in Tennessee took place on February 6, 1862, and an obscure and virtually unknown brigadier general named Ulysses S. Grant captured the fort and opened the Tennessee River to Union movements. This early in the war, Union victories of any kind were scarce, and this one was probably the most consequential of the war to date. Grant then moved directly on Fort Donelson, entrapping the place both by land and sea from February 11-16. On the morning of February 15, the Confederate commander, Simon B. Buckner, sent a note to Grant requesting an armistice and asking terms of surrender. Buckner was expecting to give up the fort but get his soldiers paroled so they would not be prisoners of war. Grant refused to give terms, but demanded unconditional surrender. The Confederates surrendered the next day, the 16th. This victory opened the Cumberland River, an important avenue for the invasion of the South, to Union operations, and Grant became instantly famous, earning the nickname "Unconditional Surrender" Grant.

President Lincoln took note of the fact that in Grant he had a general who could win. On February 20, 1862, Lincoln promoted Grant to the rank of Major General, a prerequisite to Grant's being able to command a large army.  Grant's commanding at Vicksburg just a year later, and his future military career, were only possible through this promotion. Thus, it was one of the most consequential military appointments in American history

The Battle of Shiloh took place in early April 1862, and afterwards Grant and his forces moved on the Mississippi railroad hub at Corinth. There they settled into a siege of the place that would last from April 29 to May 30. The goal was to establish a Union strong presence in the Mississippi Valley that would lead the way to Vicksburg and control of the Mississippi River.

"My commission as Major General has not yet reached me."
Camped outside Corinth three months after his promotion, Grant had still not received his appointment as Major General. It was months overdue. He contacted the U.S. Adjutant General Lorenzo Thomas in a telegram dated May 19, 1862, writing  "My commission as Major General has not yet reached me."  On receiving this, Adj. Gen. Thomas directed an aide in his office, Julius Garesche, to issue Grant his official commission, which he created on the 20th of May and sent to him at Corinth. It likely arrived just before the fall of that city.  "A copy of your commission was sent today," Garesche telegrammed on the 22nd. The telegram from Grant is in the National Archives; the telegram from Garesche is in the Library of Congress.

"... Reposing special trust and confidence in the patriotism, valor, fidelity, and abilities of Ulysses S. Grant, I have nominated and by and with the advice and consent of the Senate do appoint him Major General of Volunteers."

This original Major General's commission has, since its creation in 1862, been with Grant's family.  Mary Frances Grant was the sister of Ulysses S. Grant. Much younger than her brother, she lived at home until married in October 1863. Among the Grant family treasures she retained: a signed photograph given her by her noted brother and several appointment documents for her husband, signed by a generation of Presidents. In that group was Grant's Major General appointment.

Dated May 20, 1862, in the immediate wake of Grant's request, it shows Grant's effective date of command as February 20.  Since Grant's appeal for his commission from the field followed military protocol and was addressed to the Adjutant General's office (and not to the Executive Mansion or War Department Secretary's office), Lincoln's and Stanton's signatures were written by proxy.  This treasure of American history has remained in Mary Grant's family with her descendants until now.